It’s been a few weeks since my last post. For good reason, though. I’ve been hard on it lately and I’ve got a lot to catch you up on. I’ll pickup where I left off, just after my first solo, and let you know what I’ve got coming up in just a couple of weeks.

Let me first say that EVERYTHING changes after the solo. This was not something that I had fully grasped beforehand, and the point in training where owning a plane makes all the difference in the world. Once your instructor has signed you off to solo, he simply needs to supervise your future solo practices. Supervise, for all practical purposes,   means checking weather, ensuring he understands where I am going and for how long, and communicating before and after the flight. Now, with most flight students, the plane will be booked a week in advance for an hour-long block, the weather may or may not allow the student to fly, and hopefully the student using the plane before didn’t break anything. In my case, our plane is ready to go at a moment’s notice. Does it look like a nice evening to fly? I’ll just drive to the airport after work, practice my landings for an hour or two, then go home and have dinner. See my point? In the 2 weeks after my first solo, I racked up additional 13 hours of practice time, with only half of the days in that time period having decent weather. On VFR (pilot term for non-shit weather) days, I was averaging more than 1.5 hours per day.

But not all of it has been upward progress. As much as we love owning, we have definitely dealt with our fair share of issues. Thank Bernoulli we have a fantastic A&P (Airplane Mechanic) on the field who has helped us out tremendously. We’ve gotten to work alongside both him and our instructor for all of the work, which has been as much a part of our training as the flying itself.

Speaking of training… So, the solo kicked things off. After that, it really started clicking. In two weeks, I went ahead and knocked out the night cross country requirements, the intro to navigation and instrument flying, and the dual cross country (in a rental plane while our plane was in the shop). These all went extremely well, and would normally be worthy of their own write-up. However, these were all done within a 4 day period, so there wasn’t a lot of time for writing much of anything. The night cross country was a quick flight over to Greenville and back, a total of 102 nautical miles. The intro to navigation was a flight completely under the hood (using a device that keeps you from seeing outside) and took roughly two hours just practicing navigation without visual cues. The dual cross country is a flight with your instructor to practice using maps, speed and wind calculations, fuel estimates, etc. For our flight, we went to Fayetteville, Raleigh-Durham, and back to W17. With that being my first time in a class Charlie airport (RDU), I had quite a lot to learn on the radio. At that point, we began prepping for the solo cross country and getting the endorsements in my logbook.

The cross country itself was something epic. Originally we had planned to go to a nearby airport to meet the minimum requirements for the solo portion. But looking at the map, it’s hard not to see all of the amazing airports just an hour or two away. My instructor helped me plan a route that would take me across some of the most scenic terrain our state has to offer and stop at the birthplace of aviation, First Flight airport. My total route would be 430 miles, cover 6 airports, have 2 fuel stops, and follow the coastline for over 100 miles.

Originally I had it planned for another week out, but the forecast for that Sunday morning went from “Mehhhhh” to “Holy smokes this is perfect” real fast. I met up with my instructor early on Sunday to go over everything one more time, and then headed to the airport. I got my coffee, went back over everything, preflighted the airplane, and then… didn’t leave for another two hours. Everything takes time in aviation. I’ve yet to pinpoint why exactly that is. You know you can preflight the plane in 15 minutes and taxi in 5, but no, it will somehow take you 45 minutes. 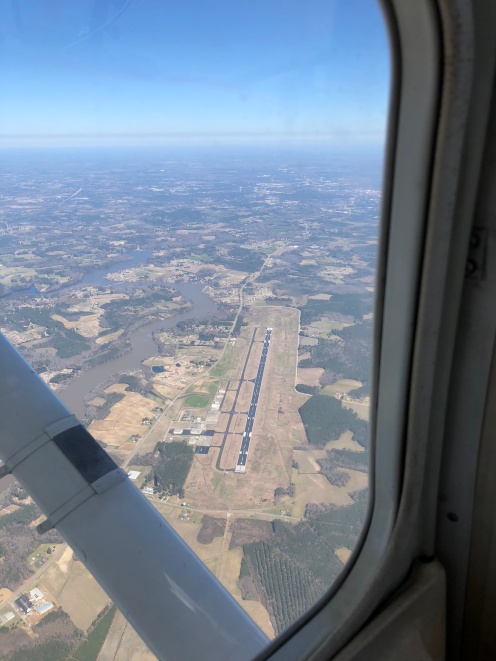 Checkpoints on the way to First Flight

Once out of W17, the weather was a dream. Winds were in my favor for the first half of the trip, and by the time I was on my way back, they would die off almost completely. I had all of my checkpoints laid out, and I was managing to stay on track and cruising even faster than originally planned. After a full day in our airplane, I can confidently say that it will cruise at 98KIAS or 112 MPH. That’s fast for a 40 year old Cessna 150. The trip to First Flight airport took exactly 1.5 hours, a trip that would take in excess of 4 hours by car. The wind at First Flight was definitely moving, but luckily it was right down the runway. Once I landed, a couple from Arizona in a Mooney was happy to take my photo and then proceed to tell me about how much they loved 150s and that they both learned together in one more than 20 years ago. 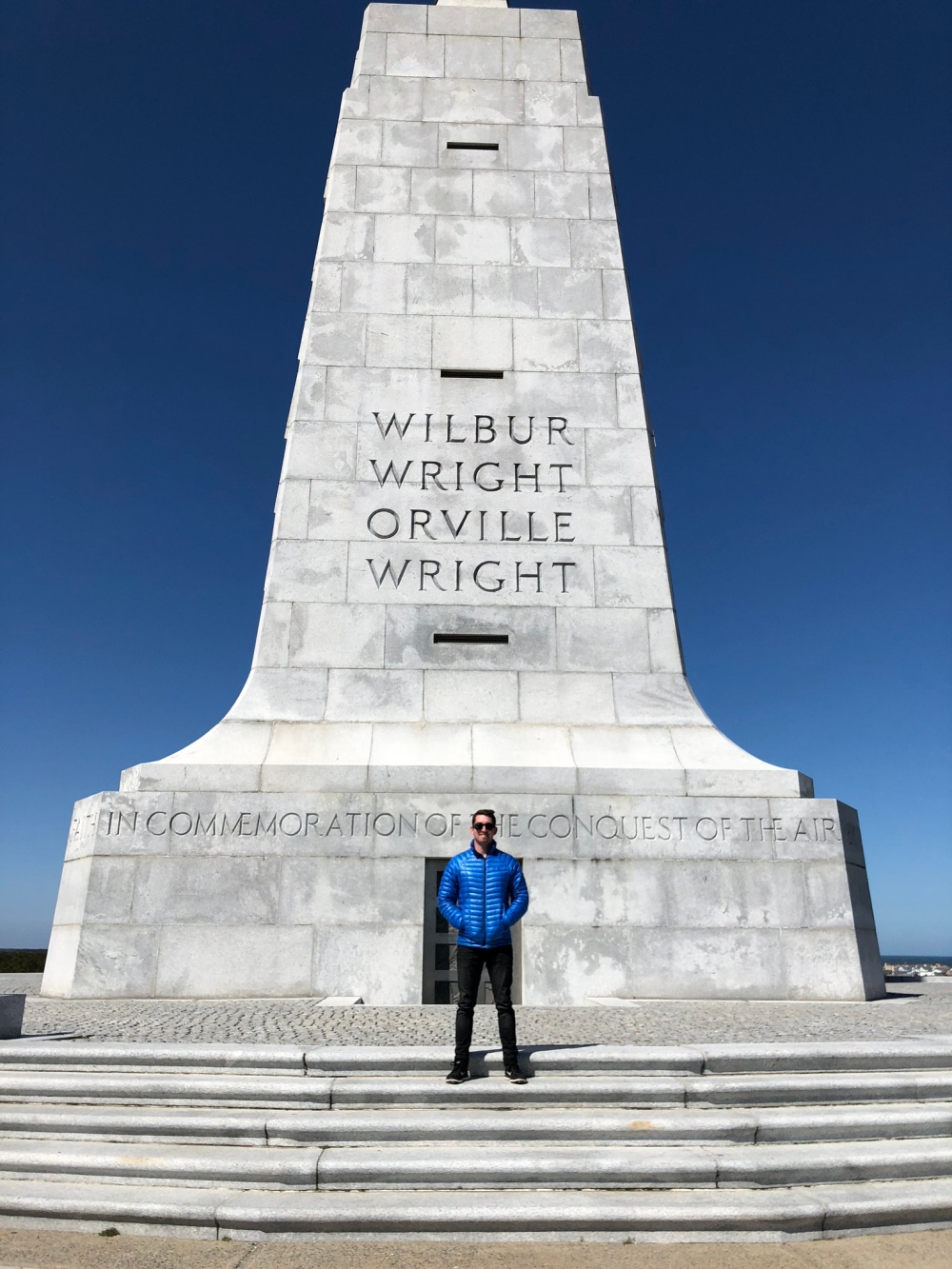 At First Flight, I was able to visit the pilot lounge, walk around for a bit, get cold, and then get back in my plane. Although the weather was amazing, once the dry wind hits you at 45 degrees, it feels a lot colder. One thing that I really found oddly fun at First Flight was taking off with people looking on. That’s not something that happens often. But with the monument just 200 yards or so from the runway, the tourists walk right up to the taxiway and watch the planes take off. What’s really funny is that the only other time I visited the airport, around 4 years ago, I did the exact same thing.

From First Flight, I flew just 5 miles south to Dare County for some fuel before making my way down the coast to Ocracoke Island. At Ocracoke, I encountered probably the worst winds I had faced so far, but still within the crosswind component for my plane. In the air, I calculated the component carefully before deciding to land. And then, without any issues, I greased the landing in probably my best landing to date. Ocracoke Airport is literally right on the water, with the beach sitting just off of the runway. Had the winds not been howling, I may have gone down to the beach. However, after opening the doors and walking around the airport for a minute, I was ready to get back in my warm cockpit. 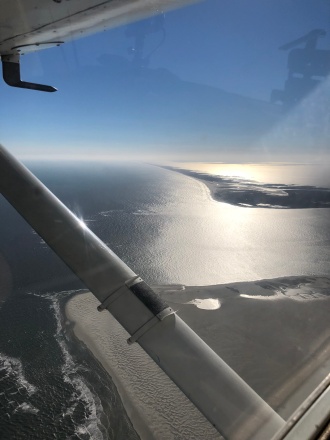 The next leg of the trip was meant to be much longer, but Cherry Point approach cleared me through the restricted military airspace and I was able to fly from Ocracoke almost direct to New Bern, my next fuel stop. New Bern is a towered airport, which was also a key part of this trip. I need 3 solo full stop landings at towered airfields to complete my training requirements. 1 landing at New Bern and 2 landings at Kinston, my next stop, would fulfill all of those requirements in one trip. Coming into New Bern, I originally was #1 for landing with a leer jet coming into the pattern with me. As soon as the controller asked, “N63472, what type are you?”, I knew I was being lapped. He had the Leer enter the left Base as I was entering the downwind. By the time I was on final, the Leer Jet pilot was already napping on the couch in the FBO.

Kinston was my next stop. I found this airport to be one of the most interesting simply due to the massive size of the runway and the complete lack of activity. I needed 2 full stop landings there to finish my requirements. It was just me and the controller. There wasn’t even ground activity. So for 20 minute or so, I just flew and taxied around an 11,000 ft runway by myself. That enough space for me to takeoff and land… 5 times.

After departing Kinston, it was just a quick jump back home. The sunset was incredible and the perfect way to end the day. But this is where it gets good. As I was approaching Raleigh, I called up Seymour Johnson approach (The controller who had been following me from Kinston) to let him know I made it home safely. Nothing. No response. I test my radios. Sure enough, I can’t hear anything. Oh man, here we go. Dead radios. I’m pulling cables, making sure my connections are right, pressing lots of buttons… Nothing. So I call in to SJ approach, “Seymour Johnson Approach, N63472, I don’t know if you can hear me but if so, please cancel flight following. I have the airport in sight and will be landing at Raleigh East. N63472.” Then, as I am coming in to land, something catches my eye. Somehow I managed to flip the little switch that toggles the overhead speaker on and the headphones off. That speaker works about as well as our heated seats (Hint: we don’t have heated seats). I flip the switch and boom, radios are alive. I quickly call up the controller who then says, “N63472, you kept yappin at me. I canceled your flight following about 15 minutes ago when you asked. What happened to your radios?” Face. Palm.

After a smooth landing back home, I was finally finished. This was my longest flight by 4 hours, and it felt like it. But damn if it didn’t confirm why exactly I got into this. The views, the amount of space that I covered, and the overall experience was just fantastic. It’s definitely an experience unlike any other, and is far different from just doing laps around your own airport. I look forward to many more trips in the future!

I’m now sitting at 36 hours. I need just a couple more hours of practice with my instructor, some practice on my own, and then a LOT of test prep. But that being said, I’m right around the corner from my checkride,  and soon enough I’ll be landing on runway done! As of yesterday, I’m now scheduled for the checkride. April 14th. Wish me luck!

Here is the video from my solo cross country trip. What a trip it was. Enjoy!

View all posts by Seth Mason