Our stories of why we became interested in aviation are probably not very unlike many of the pilots out there today. For me, as a kid, I enjoyed flight simulators and always looked up eagerly at the sound of an aircraft engine, which would sometimes just end up being my neighbor’s lawnmower. I enjoyed the stories my Dad had of his time on an aircraft carrier, catapulting F-4’s off a flight deck faster than the Vne (Never Exceed Speed) of our Cessna 150. Fast-forward 15 years, and after purchasing my first home, the first piece of artwork was an over-sized poster of a P-51. To this day, when traveling commercially, I always take the window seat and essentially glue my face to the window for a few hours.

While this fascination for aviation always existed, I rarely thought about the idea of actually piloting a plane. I didn’t grow up in a family of aviators or have a GA airport nearby. I didn’t interact with any pilots on a regular basis, if ever. It seemed like something out of reach or meant only for career pilots. In fact, the first time I ever flew in a general aviation aircraft was the first time I went skydiving. That was LESS THAN A YEAR AGO. All that being said, it’s no surprise that I never actually took the time to research what it would take… until recently.

Most pilots start at a flight school, or maybe a local flying club, and rent airplanes throughout the course of their training. Many go on to rent for years, with a lot of pilots never owning their own planes. When David and I first began discussing getting our licences, we started by looking at flight schools in the area. The +$150hr rental and instructor rates were daunting. So, we moved on the local flight clubs, which offered a more cost-effective option, but a less versatile schedule. Then, we started crunching numbers on ownership. That’s really where we learned that aircraft ownership really doesn’t have to be that expensive. We have a massive advantage in that we are good friends operating on the same training timeline with similar budgets. A solid partnership makes ownership more accessible and also more fun in my opinion. 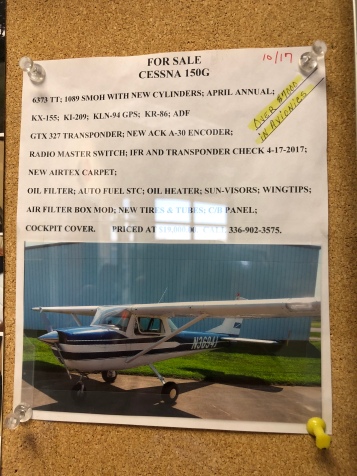 After a lot of online research, lots of emails, and a few meetings, we finally found a flexible CFI (Certified Flight Instructor) who was more than happy at the idea of teaching us in our plane. He discussed some of the basics with us and offered to help in securing a tie-down spot and ferrying the plane home when needed. After more discussions, we decided that the idea of having our own plane, ready to go whenever we like, was something worth pursuing.

First, we had to define the role of the plane, the type of plane, the distance we would be willing to travel for the plane, and finally, the price range. We had a few different training aircraft picked out and our budget fairly honed-in. We watched the sites such as Trade-a-Plane like hawks. When a local (within a 2hr drive!) Cessna 150 came onto the market, we knew we would either take the plunge now or talk about it until it becomes “that thing we almost did once”.

We will have another post dedicated to the entire process of purchasing the plane, but I can say that from first laying eyes on the plane to having it flown to its new home was just one month.

With the plane now here at our local airport, we are paired up with a fantastic CFI who just recently went full time into instructing after teaching part time for decades. We are hitting the books hard and will be flying a minimum of twice a week (weather permitting). Being aircraft owners, there is a much larger responsibility to keep the plane airworthy while also learning how to operate it (Example #1:  See previous post). All that being said, we are both beyond excited to start this process and obviously very committed to making our ambitions a reality.

Throughout the process, we plan document all of our training stages, expenses and surprises (good and bad) while hopefully showing that aircraft ownership doesn’t have to be unobtainable, even to those on a reasonable budget.

View all posts by Seth Mason